Friends and family mourn the loss of Chuck Bush, who made history in 1954 – the same year that the U.S. Supreme Court officially struck down the practice of “separate but equal” in the landmark Brown v. Board decision.

Chief Justice Earl Warren personally sought to integrate the Supreme Court Page Program in 1954, and some believe that Warren viewed it as an early implementation of the court decision that he himself had lobbied for among his fellow justices just months prior. Bush was chosen as the first African-American Page to serve in the Court.

Speaking of his experience as a page, Bush said that: “I was thrust not only into a white school but also into a white power structure at the court. Pages are next to the law clerks on the totem pole, so we were treated with a great deal of respect.  Suddenly folks who were accustomed to treating black people one way had to change.  It was very clear that no one wanted to cross the Chief Justice on that score.”

After serving from 1954-1957 as a Court Page, Bush went on to become one of the first African-American graduates of the U.S. Air Force Academy and later had a decorated military service, serving as an intelligence officer in Vietnam in 1967-68. 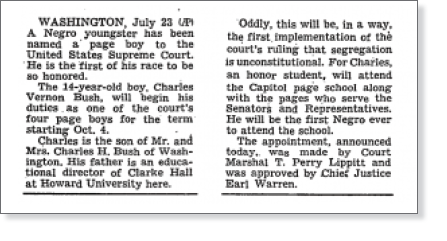 To read more about Bush’s life and experiences, click here to read his obituary in the Washington Post. 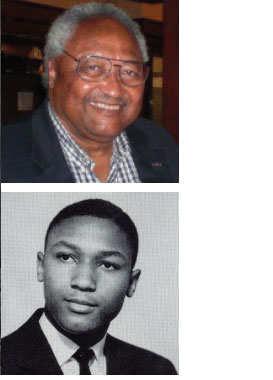