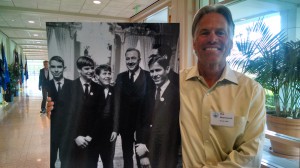 Phil Marinovich (Senate, 1969) holding a picture of himself with Senator Eugene McCarthy and other pages in 1968.

Over 65 former pages and their guests gathered at the Richard M. Nixon Presidential Library and Museum on March 2, 2014 for the first ever meeting of former pages of the US House, Senate and Supreme Court living in the southern California area. The guests were welcomed by Nixon Foundation President Sandy Quinn who shared his anecdotes of his time in Washington, DC, followed by a program which included the screening of the soon to be released documentary about the page program. After the program, the guests were led on a private docent-led tour of the museum.

Pages in attendance came from as far as Seattle, Washington and Wyoming, and ranged in dates of service from the 1950s to 2009. Each shared stories of their times as a page, including two former pages (John “Shep” Barrison and Browne Greene) who were working on the floor of the House of Representatives in 1954 when the Puerto Rican nationals shot guns in the House. The reception room was adorned with pictures of President Nixon with pages, as well as pictures of Pages serving during the Nixon era. 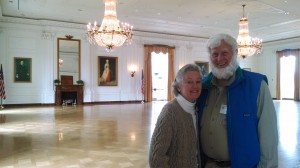 John “Shep” Barrison (House, 1954) and his wife Virginia in the East Room replica in the Richard Nixon Presidential Library and Museum 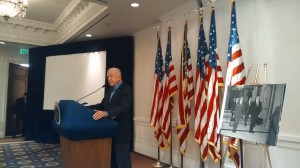