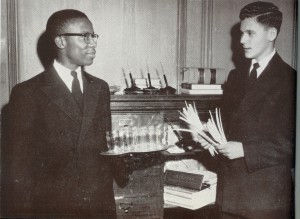 When I was appointed at the age of 14, I only knew that it was an honor to be selected as a page at the highest court in the land. At the time, serving as a page for the Chief Justice and Associate Justices, working with the Marshall and Clerk of the Court, was something I could never have contemplated. The Supreme Court building, with its Corinthian style architecture, magnificent white marble and bronze spiral staircases, was in itself humbling.

The era of civil rights litigation and the Little Rock case were certainly historic and memorable. I was conscious of being the only ”colored” page among four [Supreme Court Pages] – perhaps self-conscious is better, as I didn’t want to have attention focused on me. My parents and friends never mentioned to me anything about my race or the case itself, stressing only that my job was to work hard and work well. I didn’t think twice about serving water to the Little Rock attorney. It was simply part of the job, like preparing the courtroom for the sessions; taking correspondence between the justices, law clerks, and other recipients; retrieving law books and other references; and serving as a messenger for the Justices during closed conferences.

The Little Rock case was just one high-profile case I witnessed, and they all contributed to my growing interest in public policy. I knew I was one beneficiary of the deliberate decision in 1954 to integrate the Supreme Court pages, and I began to pay attention to the issues of integration in all aspects of society, from public schools to housing, healthcare, and employment opportunities. Watching the behavior and focus of the Justices, as well as the highly professional presentations by the lawyers appearing before the Court was not only moving, but very instructive. I subsequently have spent a great deal of my career in public policy at the federal and state levels.

Sometimes pages were asked to conduct tours of the Supreme Court for dignitaries, special guests, and others in the general public. Actor Edward G. Robinson was one memorable VIP. We prepared to be tour guides by reading documents and learning from each other and our adult supervisors. We knew as tour guides we represented the Court, and it was an honor to be asked. Sometimes we even gave tours to students visiting the Court, young people our own ages, who must have wondered about the knickers, stockings and double-breasted jackets that constituted our uniform – not exactly stylish.

Chief Justice Earl Warren himself took special interest in the Court pages. He met with us periodically as individuals and as a group, always stressing the importance of education both at CPS and in preparation for college. He pledged to do all he could to support our future development.

Before attending CPS, I had only gone to school with classmates who were African-Americans. Suddenly I was interacting with young men who were pages in the Court, House and Senate, from all across the country and from various social and cultural backgrounds. I value the meaningful relationships built by working together in various school clubs and class projects, and many pages from high school are still close friends.

After his Page service, Samuel Williams earned a B.S. in Electrical Engineering from Howard University, an MBPA from Southeastern University and a Ph.D. in Public Policy and Administration from Walden University. His professional experience includes the White House Executive Office of the President, the Office of Management and Budget (OMB) and the Department of Commerce. Samuel was a Captain in the U.S. Army in Vietnam and was awarded the Bronze Star for Service. He thanks his parents Laura and Simmie Williams, who came from very modest backgrounds, for their steadfast support and commitment to education and learning. He currently lives in Bowie, Maryland, located near the state capitol of Annapolis.