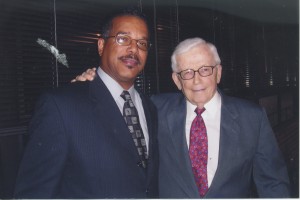 Fifty years ago, April 14, 1965, I was plucked from my high school in Springfield, Ill., to become the first “Negro” Page in the U.S. House of Representatives, in Washington, D.C. nearly a thousand miles away.

In the ensuing days, weeks and months, stories and pictures of me graced a wide variety of publications –The Washington Post, Chicago Tribune, Newsweek, Ebony, Sepia, the Weekly Reader, Jr. Scholastic and of course, my hometown paper –The Illinois State Journal and Register. I received letters from kids around the country and was asked for my autograph. In a way, I was Famous @ Fifteen.

This was in the midst of the Civil Rights movement and very significant events in the nation’s history: five weeks after Selma and “Bloody Sunday,” two months after the assassination of Malcolm X. And I was there when the Voting Rights Bill was passed. Over the years I’ve told audiences that I’m still surprised my mother let me go. That’s still true.

It’s debatable what role my appointment had in the civil rights mosaic. I didn’t win an election. I didn’t “ace” a test. I didn’t place first in any contest. I didn’t help a boycott, or offer any civil disobedience, to draw attention to an injustice. My contribution was to go to Washington, do my job, make my family and community proud and that’s what I did. My responsibility was to show all those involved that an African-American teenager could handle the demands of running errands, answering phones and rubbing elbows with these elected officials. It was important that I did not fail or embarrass any involved. The door of opportunity had to remain open. The next person would not endure an undue level of scrutiny.

Demonstrating who and what I was played a small, but important role. For many of the other Pages and some of the Congressmen and women I interacted with, I was not just the first “Negro” Page but the first “Negro” they knew and conversed with for any length of time. Their impression of me would last a lifetime, setting the expectations for other people of color they encountered. I did not comprehend fully the weight of the torch I carried.

Paul Findley, a third-term Representative from central Illinois had the idea to sponsor a Negro Page and took the chance. His motivation was doing the right thing. And his timing was to get Gerald Ford, the House Minority Leader at the time, to make my appointment on the eve of the 100 year commemoration of the assassination of Abraham Lincoln.

Findley has had a life of doing the right thing. As a teen, decades before my nomination, Findley wrote a letter to the editor denouncing a scheduled minstrel show and urging folks not to support the show because it was demeaning to black people, Again, in 1964, a year before my nomination and without a go ahead from party leaders, Findley again used the written word to write his fellow GOP caucus members urging them to support the 1964 Civil Rights bill. He went on to be an early supporter of getting out of Vietnam, world peace without nuclear proliferation and a homeland for Palestinians.

Findley had Irv Smith, a Springfield Republican, put together a committee to find the teenager to send to D.C. My buddies Rufus, Jesse, Tom and Robert were interviewed and all would have served with distinction. Smith told me years later that I was selected after a strong endorsement from my junior football coach, the late Don Timm.

After 50 years, I have clear and poignant memories of that life-changing experience and meeting people who made a difference – Senators. Everett Dirksen and Charles Percy (both R-Ill.); Vice-President Hubert Humphrey; Donald Rumsfeld and Melvin Laird (R-Wis.), both future Secretaries of Defense; future Presidential candidate Bob Dole (R-Kan.); John Lindsey (R-N.Y. who switched parties in ’71), future mayor of New York City; and Al Quie (R-Minn.), who went on to be Governor of Minnesota.

I also have memories that make me swell with pride. As a Page I was told they hadn’t had many pages who understood the legislative process as well as I did. That is a reflection on the quality of education I received in Springfield Public Schools. It also was a predictor of my future career of being a reporter and sitting through hundreds of tedious committee meetings and hearings at the city, county and state government levels.

But my proudest moment came in 2010, when I was invited to speak at the departure ceremony (graduation equivalent) of that year’s Pages. In the audience with the parents, grandparents, aunts and uncles and brothers and sisters were 75 Pages — about half of whom were female (no girls in 1965) and a third African-American, Hispanic and Asian. It was instinctive to feel I had something to do with keeping that door open.

But with pride comes disappointment. Today, since Aug. 31, 2011, the Page Program in the House of Representatives no longer exists. Speaker John Boehner and Minority Leader Nancy Pelosi agreed that the cost was too expensive and ended the program — a mistake in my opinion. Another reason they cited was the Pages had to be supervised since there had been scandals regarding Representatives who had inappropriate relations with Pages. So they terminated the program rather than find more stringent punishments to the offending adults.

The Page Program was a stepping stone for hundreds of young men and women to fulfill their potential; to have an unequaled experience of seeing democracy at work. Many, perhaps most or all Pages, found success in business, medicine, law, journalism, public service and a host of other professions. Most, if not all, would have found success without the Page program but it didn’t hurt.

Rather than terminate the program, I would rather see Congress, particularly the House, do the right thing for America. Not make everything partisan — a gotcha moment — and not try to hold the other side’s legislation hostage to get theirs passed. Congressional leaders from 1965 could teach legislators of today a lot about getting things done and, while taking care of America’s business, doing the right thing.

After his Page service, Frank began a career as a reporter at his hometown newspaper, the Illinois State Register. He then joined WCCO-TV in Minneapolis, and later started his own public relations firm, concentrating on telecommunications and government.   He has also worked with the Illinois Attorney General, Ameritech and Stroger County Hospital in Cook County, Ill.   He is a former Executive Director of the Illinois Fatherhood Initiative. Frank now lives in Texas.