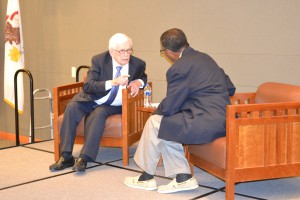 A packed room of Pages, friends, and family members gathered at the Abraham Lincoln Presidential Library and Museum to commemorate the 50th anniversary of the appointment of Frank Mitchell as the first African-American Page in the U.S. House of Representatives.  At the time of his selection in 1965 — the 100th anniversary of Lincoln’s assassination — by Rep. Paul Findley (R-Ill.), Frank was a 15-year-old high school student in Springfield. Frank’s story, “Famous at Fifteen” is published in the summer 2015 Capitol Courier and on the website.

Frank and Rep. Findley, who still lives in his home town of Jacksonville, Ill., headlined a panel discussion moderated by Chicago Tribune journalist and former Page Michael Esposito (Senate ’84).   On hand to record the program were CSPAN, two Springfield TV stations and newspapers in Springfield and Jacksonville. 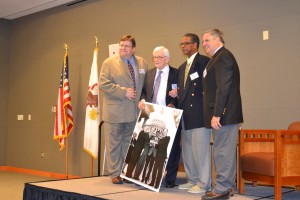