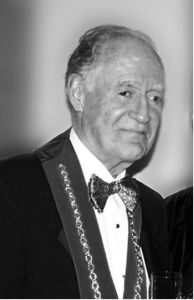 We recently lost a special member of the Senate family.  William D. “Bill” Mohr, the last shorthand reporter of debates in the United States Senate died on June 20, 2014 at age 95. Bill served for 23 years in the office of the U.S. Senate Official Reporters of Debate.  Many Senate pages who served during the 1966 through 1989 period will remember Bill as the Senate stenographer who took the record of floor proceedings (which are published in the Congressional Record) by hand, with pen and paper — using Pitman shorthand instead of typing on a stenography machine.  By the time I first became a Senate page in 1978, Bill was the last stenographer still using shorthand.

Like many pages, I was fortunate as a young 15 year old to have adults at the Capitol who took a special interest in my welfare while I was away from family and living in D.C. “on my own.”  Bill was exceptionally good to me during my time as a Senate page (1978 through 1981), and he continued to be a wonderful friend to me long after my page years ended.  He was like an adopted father to me.

I believe our friendship started because I was always reading something on the Senate floor when I was not “on point.”  Like the other stenographers, Bill would stand near the pages while he waited to take his 15-minute rotation taking shorthand on the floor.  During these times, he would talk with me about what I was reading and what I was learning at Capitol Page School. He was particularly concerned with my safety as a young female page (there were not many females at the time), and he started making sure at the end of late-night sessions that I had other pages with whom to walk home.  If I did not, Bill would drive me himself or would have a Capitol Hill police officer escort me.

His kindness and friendship manifested itself in many other ways as well.  For example, Bill loved to work the New York Times crossword puzzles.  Every morning, he would start the puzzle during his breaks.  When he would come to the floor to go to work, he would pass the puzzle off to me, and I would take a crack at solving any parts of it I could before passing it back to him on his next break.

Bill was an excellent cook, and he loved baking, in particular.  He often would bring delicious homemade baked items to share with me and his other friends at the Senate.  He also taught me a lot about cuisine, food and wine over the years.  Bill was a long-time, active member of Les Chaine des Rotisseurs, an international food and wine society.  He was incredibly knowledgeable and enthusiastic about food and wine.

Bill was also proud of the history of Pitman shorthand, and he tried (unsuccessfully, unfortunately) to teach it to me during his breaks.  Pitman shorthand was introduced in the 1840s.  Bill learned it after he finished high school, and his early career was as a court reporter. Bill’s ability to transcribe Pitman shorthand resulted in his having a key role in interesting historical projects that required transcription of the Pitman shorthand of others.  In each of these projects, Bill first had to familiarize himself with the style of each writer and learn his or her individual shorthand symbols.

For example, in the early 1980s, Bill was contacted by University of Maryland journalism professor Maurine Beasley to transcribe the Pitman shorthand notes of Martha Strayer (1889-1968) for a book entitled, The White House Press Conferences of Eleanor Roosevelt.  Ms. Strayer had been a reporter for the Washington Daily News and a member of Eleanor Roosevelt’s “press girls.”  The First Lady held 384 press conferences and strictly limited attendance to only full-time female members of the press.  Very little information could be found about these conferences until Dr. Beasley located the shorthand notes of Ms. Strayer and found Bill to help her understand what the notes contained.

After his retirement from the Senate in 1989, Bill was commissioned by the Senate Historical Office to transcribe the journals of General Montgomery C. Meigs that were written in Pitman shorthand.  Meigs served as supervising engineer for construction of the Capitol extension and began his journals in 1853, when he was still a Captain in the U.S. Army.  Meigs used shorthand not only for speed, but also to conserve paper in correspondence with his son John Rodgers Meigs, who was killed in the Civil War.  The 2,800-page transcription of Meigs’ writings took Bill four years to complete.  Each chapter was eagerly awaited by the Senate Historical Office staff, as Bill was bringing to life writings that had never been read by historians.  His transcription became a major part of a book entitled, Capitol Builder:  The Shorthand Journals of Montgomery C. Meigs 1853-1859, 1861.

I am grateful for the opportunity to have known Bill during my formative teenage years and after, and my life has been enriched by his friendship.  I hope that former pages reading this tribute to Bill will be reminded of other adults on Capitol Hill who took an interest in them and became their second family.