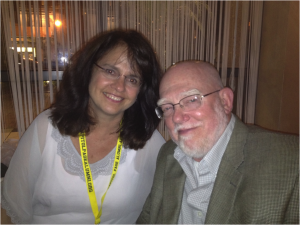 The arrival of the first female pages in 1971 presented Josten’s, the official page school jeweler, with a challenge: Create a class ring suitable for the girls. Senate Pages Julie Price and Paulette Desell, both ’72, were the first females to graduate from Capitol Page School.

I was asked by a male faculty member to help select a girl’s ring, because the boy’s ring they had in the past were too large and boyish. He gave me a catalog from which to choose and I remember examining the styles and stones. I decided on an oval shape with an amethyst stone. The rings arrived before CPS graduation in 1972. I never considered not getting one, as it seemed like the thing you did, like getting a yearbook. Before coming to CPS I attended a hippie boarding school where there was not even a discussion about class rings!

Getting and wearing the ring was a ‘high’ because at the time, I had few rings and considered jewelry of any kind as kind of out of my reach.

I enjoyed wearing it after high school, I thought it was pretty. I stopped wearing it when I became self-conscious about the attention and questions it attracted. Though I was proud of my experience as a Page, talking about it felt like bragging, which made me uncomfortable.

Now, I wear it occasionally. It has many memories attached, but doesn’t evoke the ‘oohs and ahhs’ it used to. My husband, Rob, and son, Michael think it is nice. I suppose I’ll pass it on to Michael some day and hope if will be meaningful to him.