After an overnight railroad trip from northwest Indiana, I arrived at Washington’s Union Station on the morning of July 5, 1961. (As a child of “the sticks” my first impression of Washington was that the men’s room at the train station was twice the size of my grandmother’s house. And she had a big house.) I had left town right after the annual Fourth of July parade in Whiting, Indiana. The parade’s grand marshal was Congressman Madden whom I had yet to meet, but who was about to become my boss.

My father, still believing “this page boy thing” might all be a big hoax, went with me to Whiting’s City Hall (in which I had never been before) to meet the Congressman. Mr. Madden had been well-briefed. He knew my name, my father’s name and asked, by name, if my mother was with us. She was not, preferring, I think, to deal alone with the pending nest ejection (or complete humiliation) of her youngest child. She did not come with me to the train, either, perhaps because she didn’t want me to see her cry or, worse, see me do it.

Other than a local bus, I was about to travel in an enclosed, wheeled vehicle alone for the first time. As I stood on the step to board the train, my normally reticent father shook my hand and said: “Take a chance.” I took from that he (a) thought I might be able to handle this, and (b) that as long as I had stuck my neck out this far, I should do what I could to make the most of a shaky situation.

Throughout the overnight train ride, I kept thinking about “take a chance.” By the time I got off the train in Washington, I wasn’t absolutely sure I was ready for that chance, but at least I had its address: 1505 New House Office Building.

I was met in that office by Virginia Turner, Mr. Madden’s Administrative Assistant. She put my sister’s beige Samsonite suitcase in a closet and began the process of reassurance. After asking about my life which was at the time a pretty thin volume (and not even all that interesting to me), she said, “Okay, then. Let’s get you on the payroll.”

We crossed the street from the office building (which, the following May, would become the Longworth Building) to the Capitol. It looked like a picture in my high school Latin text book, massive, a full, blot-out horizon of columns and stairs. Instead of taking the more direct route through the door beneath the House steps, Mrs. Turner took me to the main east front rotunda staircase and we climbed it. At the top, she turned me around to look at the Supreme Court and the Library of Congress.

Then we walked into the rotunda where the combined rush of architecture, art, history and all things official wobbled me a little. I blurted. “I’m not sure I belong here.” Wrong thing to say. (She might have been thinking: “This ninny took up a lot of our time and he wants to quit before he starts?” Or maybe that was what I was thinking.)

She said we all belong here. We’re responsible for this. Then she said something that freezes the time in my memory. “Never get too big for your hat. But never act too small for your life.”

Maybe somebody famous said that before she did. But here was someone who just said it to my face. So I shut up. But as I followed her through the building, everything seemed touched by history and power. Crystal chandeliers, brass here, mahogany there, marble everywhere, exotic smells that screamed “federal” at my imagination.

We arrived at the office of Mr. William “Fishbait” Miller, the Doorkeeper of the House of Representatives. I thought I had misunderstood the name. I had not. His desk sat before a radiator-to-cornice window covered with folds and waves of drapes. Two chandeliers bathed the place in radiance. Plaques and photographs covered the walls. I thought this man must certainly be the most important in the building, a notion perhaps he may have shared, as well. Briefly, I felt there was a hint of Disney about him, a thought I found instantly disrespectful and immediately squashed – but never completely erased.

I was given something to sign, told to raise my hand, swear an oath, and I was officially (age 16 years, 2 months and 2 days) a federal employee. Mr. Fishbait Miller put his arm around me, hugged Mrs. Turner, told me to work hard, stay out of trouble, and we were out the door.

We had one more stop to make. Friendship and an elastic security scheme prevailed in those days, so Mrs. Turner walked me right on to the empty floor of the House of Representatives, or at least the walkway behind the brass railing. It was warm in there. Some people were cleaning. All the lights were on. She had warned me about acting too small for my life. Fine. But everything around me seemed too big for it. I was feeling a little withered and pretty sure that the only way I could get through this was to fear everything.

The feeling faded soon enough, but settled in as a soft-spoken permanent neighbor. 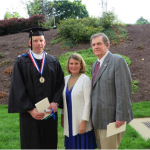 Jim Stasny, House, 1962, has compiled some of his memories of adventures on Capitol Hill as a 16-year-old from Whiting, Ind., and has shared them with the USCPAA.   From the Page corps, Jim went on to school at John Carroll University and then the Kennedy School at Harvard. He was a staff member for Sen. George McGovern, worked for six years on the Senate Budget Committee, and was a speechwriter at Fannie Mae.