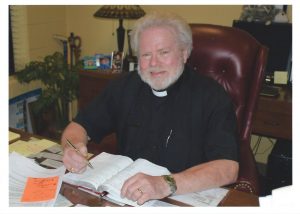 I was the overseer for the Republican Page Bench in the House of Representatives, even though I was appointed for two years by Representative George M. Rhodes (Democrat, PA).

One afternoon, after sending all the pages on the bench to their appointed rounds, I was in the cloakroom behind the House Chamber having lunch – a bologna sandwich and a cup of tomato soup. I was sitting in one of the overstuffed leather chairs reading the calendar for the day, preparing myself to respond when the Congressmen arrived.

Someone sat down beside me, otherwise the room was empty except for Helen who ran the little food counter. To my astonishment, when I looked up, there sat Vice President Richard M. Nixon. Immediately, he started a conversation by remarking that we seemed to have the same taste in lunches – “bologna sandwich and tomato soup”. I may have been a bit flustered and responded “yup”. Next, he asked me what my plans were when I “grew up”. (I was a senior.)

I told him that I might seek an appointment to Annapolis or go to four years of college and four years of seminary to become a Lutheran pastor. Vice President Nixon responded, “Son, we need more good ministers in the country. Think it over carefully!”

Next, as I remember, what seemed to be a disembodied voice said, “Mr. Vice President, what do you want to be when you grow up?” (Oh my gosh – those words came from me!) Well, he belly-laughed and whopped me on the back and said, “Son, I might like to be President someday!” He signed my doorkeeper pad, “Best wishes to Dennis Trout – Richard Nixon”, finished his bologna sandwich and left.

To this day, I’ll never know what the President of the Senate was doing over in the House lunch room. If I didn’t have the autograph, I’d swear it was all a dream!

Oh and I’ve been a Lutheran pastor for the past 48 years. Coincidence?