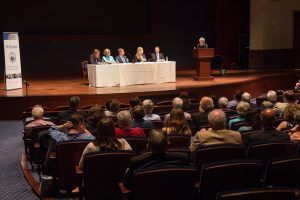 Bob Dylan wrote that “the times, they are a-changing,” but while Pages from five decades reflected on their experiences, they agreed that change was met in equal measure with history and tradition. The Pages gathered to share their experiences at a panel discussion May 26 at 2016 USCPAA Homecoming and the event was filmed by CSPAN.

The panel was emceed by author and journalist Cokie Roberts, whose son, Lee, and daughter-in-law met as Pages. Lee, she noted, proposed to his bride-to-be at the top of the Capitol Dome. “And thanks to the Page program,” she said, “I am a grandmother.”

Former Rep. Tom Davis (appointed as a Page by Carl Curtis, R-Neb.), recalled, “I was a political junky as a kid. At a young age, I memorized the names of every House and Senate member. I know it sounds pathetic, but it just clicked for me.” He recalls being on the Floor when Kennedy was shot and reading the news on the big tickers just behind the floor.

Nancy Ambrose, appointed by Sen. Lowell Weicker (R-Conn.), said her experience solidified her interest in political news and goal to be a foreign journalist. “I remember vividly starting in TV journalism when Tip O’Neill is the House Speaker and Bob Michel was Whip. The advantage I felt I had was that I not only could talk about politics, I had experienced it.”

“When I got to Washington” – he was appointed by Sen. Proxmire (R-Wis.) – I was told I would have to memorize the Senators’ names,” John said. “I already knew them.”

Camilla Bosanquet, now a Coast Guard Commander, is quick to say she was Charlie Wilson’s (D-Texas) Page. “Yes, that Charlie Wilson,” she adds. “He was absolutely larger than life and a big reason I also went into the military. He was one of the first Congressmen to have an all-female staff and he gave them total latitude to run the office. He also knew how to count votes.”

Significant legislation during her term, Bosanquet said, included the budget crisis (“our Civil Rights Act”) and the first intervention in Iraq – and that having teenagers on the Floor most certainly influenced Members’ decisions on that vote.

Sept. 11, 2001 was Joe Kippley’s second week on the job after being nominated by Tom Daschle (D- S.D). “We were evacuated after the Pentagon attack. During my term we often wondered if and when the program would be shut down. Would it be 9/11? Anthrax? What’s next?”

However fraught with uncertainty Kippley’s term was, however, he remembers time for teenage pranks, mostly involving that precious commodity for Pages: sleep. “Once we blew up a Page’s ID photo and pasted it on his shirt while he was sleeping on the job. Another time a Page was let off early while we stayed in session until the early morning hours. Back at the dorm we set his alarm to go off right away. He awoke and saw us all in our uniforms. ‘Get to school right now,’ we shouted. ‘Hurry!’”

Following the panel discussion, attendees kicked off Homecoming with a reception in the Capitol Visitors Center (photos).

Cokie Roberts – Ms. Roberts is an American journalist and author. She is a news commentator on contract to National Public Radio as well as a regular roundtable analyst for the current This Week with George Stephanopoulos. Roberts also works as a political commentator for ABC News, serving as an on-air analyst for the network. Roberts, along with her husband, Steven V. Roberts, writes a weekly column syndicated by United Media in newspapers around the United States. She serves on the boards of several non-profit organizations such as the Kaiser Family Foundation and was appointed by President George W. Bush to his Council on Service and Civic Participation.

Thomas “Tom” Davis III is a former Republican member of the U.S. House of Representatives, representing Virginia’s 11th Congressional District from 1995 to 2008. Davis currently works for Deloitte Consulting and also as the Rector and Professor at George Mason University. He served as Chairman of the House Oversight and Government Reform Committee from 2003 to 2007 and served as Chairman of the national Republican Congressional Committee from 1999 to 2003. Davis served as a Senate Page and graduated as president of the senior class of the Capitol Page School in 1967. He is a graduate of Amherst College and the University of Virginia Law School.

Nancy Ambrose has recently been moderating press panels at the National Press Club and giving seminars on press coverage of National Security issues. Previously she was the Deputy Bureau Chief and Senior Executive Producer of News at CNN’s Washington Bureau. In that capacity, she helped oversee the editorial direction of CNN’s largest bureau’s news coverage and managed more than 60 correspondents, producers, and editors. Nancy spent 17 years at ABC News in Washington, primarily covering Capitol Hill, Presidential campaigns, and producing the Sunday morning program “This Week with Sam Donaldson and Cokie Roberts.” Nancy was the first female Senate Page from Connecticut. She served under Senator Lowell Weicker, Jr. from July, 1972 thru January, 1973. Nancy is a graduate of Georgetown University’s School of Foreign Service and has a master’s degree from the London School of Economics and Political Science.

John McConnell is a longtime senior speechwriter for President George W. Bush and Vice President Dick Cheney. He served all eight years of the Bush-Cheney administration, holding the unique position of both Deputy Assistant to the President and Assistant to the Vice President. In his career, he has also practiced law and served as a law clerk to judge J. Daniel Mahoney of the United State Court of Appeals in New York City. McConnell served as a Page in the United State Senate in 1981 under the sponsorship of Senator William Proxmire. He attended Carleton College and Yale law School.

Camilla Messing Bosanquet is a Commander of the U.S. Coast Guard, assuming the duties of Operations Planning and Readiness Branch Chief for the Coast Guard’s First District (Boston, Mass.) in July 2015, after having served for two years as the Executive Assistant to the Assistant Commandant for Response Policy at the U.S. Coast Guard Headquarters in Washington, D.C. She earned her B.S. in Government from the U.S. Coast Guard Academy and a Master of Arts in Philosophy from Boston College. She was nominated by Representative Charlie Wilson and served as a Page in the House during the 1990-91 school year.

Joseph Kippley is current the Director of Cancer Services for Singing River Health System in Pascagoula, Mississippi. He is originally from Brookings, South Dakota, and was appointed a Senate Page in the Fall of 2001 by Majority Leader Tom Daschle, and served as a Page during the 9/11 Attack on Washington, DC. He later received his BA in Political Science and Economic at the University of Notre Dame and a JD from the University of South Dakota, and a Master’s in Healthcare Administration from the University of Iowa. He has written a book entitled A Page in History, a commentary on the way the terrorist attacks affected him.